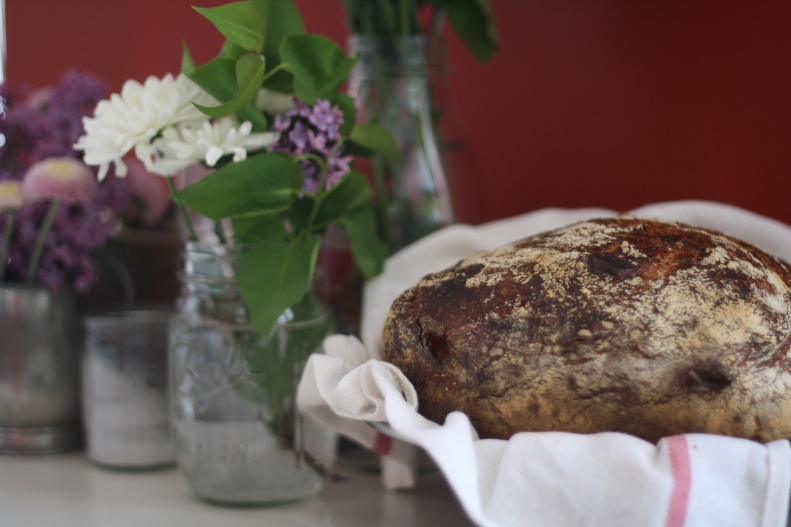 Calm down mum, just being punny. There are no metaphorical buns in my oven, but once or twice a week there is a literal loaf of bread birthed from my kitchen. It’s become a new habit I’m proud of to the point of smugness, but the truth is you too could be baking beautiful rustic loaves with a minimum of ingredients, equipment and fuss.

The recipe is by Jim Lahey of New York’s Sullivan Street Bakery, and his no-knead bread recipe caused quite a stir in 2006 when food writer Mark Bittman shared it in the New York Times. You need no more than flour, salt, yeast and water, plus an oven and a heavy pot with a lid. No bread maker, no dough hooks, no kneading necessary. What the recipe does require, though, is time: a slow-rise fermentation of 12-18 hours gives the finished loaf great flavour and requires only a tiny bit of yeast. And the other essential is baking at really high heat, in a covered pot, which makes the dough cook in its own steam forming a perfect crust.

In 2009 Lahey released his book, My Bread, with this basic recipe as the centrepiece and foundation for some gorgeous recipes. Lahey started out as an artist before falling in love with baking, and learning the art of rustic loaves in Italy. I love his no-nonsense approach, at once respectful of the tradition of bread-making and joyfully inventive with new variations. One of my favourite anecdotes from his introduction to My Bread is about how he came to know just how viral his no-knead recipe went after Bittman’s raves in the NY Times. Kitchen supply stores all over New York suddenly reported an unprecedented spike in thefts of handles from La Creuset bakeware. It turns out home bakers were finding their La Creuset handles cracked under the high heat needed to bake Lahey’s bread, so they were resorting to nefarious means of replacement!

If indeed you wish to preserve your own fancy handles, all you really need for this bread is a cast iron pot with a lid. I bought one by American brand Lodge for $40, which is great value considering everything you can use it for. In Australia we often call the same thing a camp oven, or a “mulligan pot” if you’re my dad, and they’re available cheaply at hardware and camping stores. I’ll save my lecture about the beauties of cooking in cast iron for another time!

But back to you baking your own bread. Maybe you’ve tried before and been turned off by a bad experience. We’re taught to fear baking bread,  but you really needn’t be scared. This no-knead bread takes almost no effort; it just takes time. But once you get the hang of the method and a sense for the timing, you’ll start to find it easier to work bread-baking into your weekly routine. Start a dough one evening after dinner – it takes 10 minutes – then the next evening start the second rise when you get home from work. An hour or two later your home will be rich with the smell of baking bread, and you’ll have the inimitable joy of slicing into a crusty loaf you made yourself. Personally it works for me to start the second rise, bike to the park for a run, start the oven pre-heating while I take a shower, then set the bread to bake. 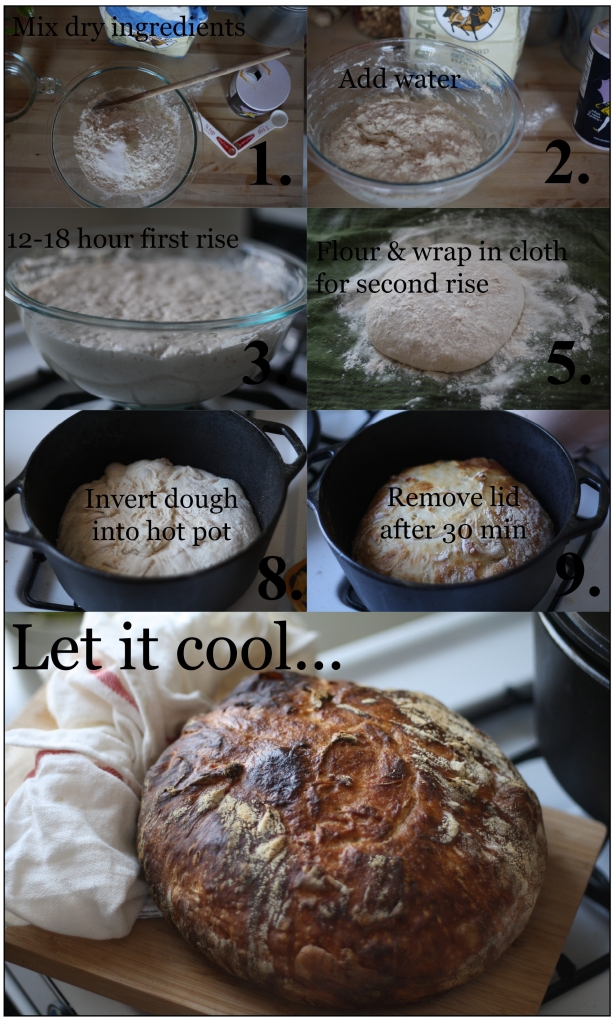 The other thing I love about this recipe is its unfuckupability. I’ve made this bread dozens of times now and every now and then I’ll have a brain snap and make a mistake – forget to preheat the pot, totally smoosh the dough unevenly into the pot, add a little too much water. No matter what, we’ve never been disappointed with a loaf; it always comes out of the oven looking fine.

I’d suggest trying this for the first time over a quiet weekend. After making it a couple of times you’ll have the recipe committed to memory, and it will become second nature to start a dough the day before you’re having friends for dinner or a weekend brunch. They might just hate you a little when you say “sure, I baked it myself, it was nothing!”